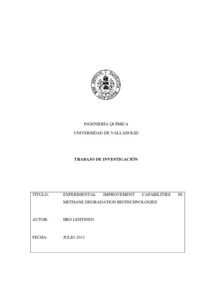 Within the last decades, biological treatment methods have emerged as a viable solution to mitigate methane's adverse effects on climate change, treating low CH4 concentration emissions far more cost-efficiently than conventional physical-chemical methods. However, the high stability and low aqueous solubility of methane still pose key constraints for a cost-effective biological removal. For this purpose, alternative approaches to increase the mass transfer of methane to the microorganisms were investigated in a biofilter and a biotrickling filter configuration.

A novel fungal biofilter was operated at an empty bed residence time (EBRT) of 4 minutes at a CH4 inlet concentration of 15 ± 0.9 gCH4/m3 for 58 days in order to achieve an enhanced methane elimination supported by the low-moisture content biofilter conditions and the aerial growth of fungi. Moreover, batch biodegradation tests using CH4 as the sole carbon source and a pure strain of the fungus Graphium sp. were performed. Additionally, a two phase partitioning biotrickling filter using silicone oil as a non-aqueous phase and Methylosinus sporium as CH4 degrader was operated at 4 minutes of EBRTs and 14.3 ± 0.5 gCH4/m3 for 45 days in an attempt to increase CH4 mass transfer.

An unstable and poor CH4 removal performance was observed in the fungal biofilter throughout the complete operating period with average removal efficiencies of 0.5 ± 2.4 %. This poor CH4 abatement performance was attributed to the low EBRT used in the bioreactor. Graphium sp. was not able to use methane as a sole carbon and energy source, CH4 being only degraded co-metabolically with methanol. On the other hand, the two-phase biotrickling filter performed consistently, reaching a maximum steady elimination capacity of 49.5 ± 6.0 g/m3/h.

The results achieved in this work can assist in the development of full-scale applications of innovative biotechnologies supporting an enhanced CH4 mass transfer, with two-phase-biotrickling filtration as the most promising technology.