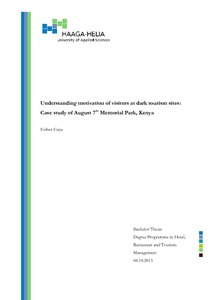 Recently, the fascination of death and disaster has influenced the tourism scene and today, millions of visitors from all over the world travel to sites of death and disaster. This study aims to identify what motivates tourists to visit sites of death and disaster in order to understand better visitor behavior at such sites and specifically the August 7th Memorial Park, Kenya; which was the site of a 1998 terrorist bomb attack that caused the deaths of 218 people and injured thousands more. Further it aims to provide site managers with information for better site management. Research questions ask which push and pull factors of motivation and which other motivational influences play a role at the Memorial Park. Also what the implications of these motivational factors are to site management. The classic push and pull motivation model by Crompton (1979) and Dann (1981) is used to build a theoretical framework for visitor motivation in dark tourism. The researcher also introduces and proposes a connection between these motivation factors and John Urry’s (1990) Tourist Gaze Theory.

A structured questionnaire and interviews are used to collect data at the Memorial Park from 108 visitors and 4 staff members respectively. Microsoft Excel and Microsoft Word are used to analyze the questionnaire and interviews respectively. The study finds two push factors of motivation at the Park; curiosity and novelty seeking with non dominant roles; also pull fac-tors of motivation, remembrance, education, artifacts and exhibits with non dominant roles; and cultural heritage and identity, death and dying, and location with dominant roles. Media plays both ‘push’ and ‘pull’ roles. Other factors found include history; also rest and relaxation with a dominant role, catharsis and peace, change, art in the Park and commerce which are unique to the Park. Additionally, the ‘collective tourist gaze’ is dominant at the Park.

These findings present implications which provide managers with tools to better manage the site. The Park’s aims and mandate constitutes education and remembrance respectively but their roles are non dominant. There is therefore need to create more interest in the Memorial museum by for example having special garden exhibit showings or considering a ‘free entry day’ concept. The non dominant role of curiosity and novelty seeking implies non visibility of the Park.. Enhancement of Park interpretation by for instance posting informative signage in the vicinity of the Park can draw in new markets. Further, commerce, one of the Park’s unique factors, can advance the Park’s mandate and authenticity by for example selling themed commissioned works of art and souvenir items. Repeat visitors at the Memorial gardens for rest and relaxation present opportunity to promote the Park for instance through brochures. Results also imply recognition of new marketing strategies such as promoting the Park as place of remembrance, using social media to create a notable presence, nurturing the role of media for consistent and positive coverage and promoting the park to the Muslim community.

In conclusion, this study not only contributes generally to studies of motivation in dark tour-ism sites but suggests tools for better management and interpretation of these sites.