The history of capitalism and its social and economic consequences 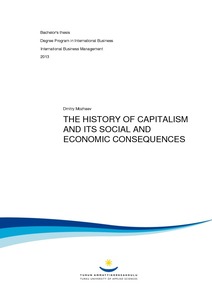 Today people rarely think about such complex philosophic topics as political and economic systems and therefore take current formation for granted. The research performed in this paper indicates there are certain reasons to question the current socio-economic and political world order. Despite the capitalistic worldview is the dominant one, there are certain doubts that it can stay effective in its current state while facing the challenges of the 21st century.

The main objective of this thesis is to go briefly through the events of the past centuries in order to understand how the realities have been changing and which factors were the main causes for those changes. Additionally, it is very important to find out if these transformations have a positive or negative influence on different social layers. Finally, this paper has a goal to estimate which trends will be the most influential in the coming decades and what effect they can have on the socio-economic environment in the future.

The findings of the research indicate that even though the changes that have happened to the capitalistic system during the last decades were really massive, many people still do not fully realize this fact and therefore continue to live according to the realities of the 20th century. Moreover, people are not interested in political agenda and therefore are not willing to make any significant changes to the current system, which is definitely a very comfortable situation for those who are on the top in today’s global hierarchy. In other words, in the 21st century "the rich get richer and the poor get poorer", as the common catchphrase says.