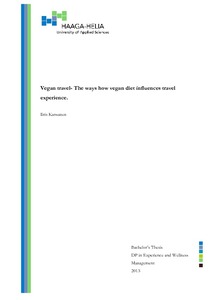 Following a certain diet may create challenges when dining out, let alone when travelling to another country, where language barriers and cultural differences can set certain difficulties. Veganism is ideology based diet in which a person excludes all the animalia based products from the diet. The most common reason for veganism is animal rights, however also health, nature and other reasons are likely.

This thesis has been commissioned by Vegaaniliitto ry (Finnish Vegan Society) and is aiming to gather information on the possible limitations that vegan diet sets for the traveller. Furthermore the aim of this thesis is to gain better understanding on which aspects vegan diet influences on individual’s personal travel experiences.

The chosen research method in this reseach based thesis is qualitative research and was conducted in a form of an interview. During April 2013 ten vegans were interviewed about their personal views and experiences on how veganism has influenced on their personal travel experience.

The results represents the information section by section, according to the interview form. According to the results the travel motivators and the type of the travel impacts the attitudes towards the food habits while traveling. For vegan culinary tourists the quality of the food has bigger impact on the travel experience than for those with other travel motivators. Amongst all the respondents the impact on travel experience was mostly seen more as an positive issue rather than negative. Majority of the respondents did not feel that their diet influences on getting to know a culture of the destination.