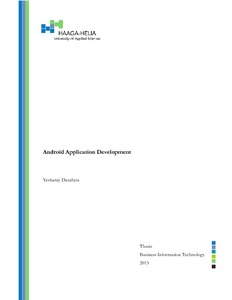 The theoretical part of the thesis discussed the Android platform, its history, the compatible web services and the methods used in this thesis process.

The empirical part of the thesis describes the whole process of developing an Android application which uses a web service. The emphasis was set on finding out how a program would work with the Parse web service. The tools that were used during the development phase were Eclipse with the ADT plug-in, the Android SDK and the Parse SDK.

The result of this thesis project was a working Android application which can connect to the Parse web service. The application can input and retrieve data from it and display information to the user.

The thesis concludes that the study at hand can be extended with further development of the application by improving the design and adding more functionality. Moreover, it is possible to improve the user experience by creating a website for the application which would use the same web service.