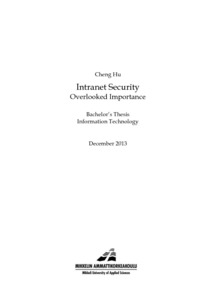 The aim of the study is to find out how does vulnerabilities affect intranet security and credentials in a small enterprise environment. Due to low Local Area Network security level will probably leave exploits and loopholes that could be utilized by attackers and eventually lead to data loss or credential leakage. Thus the research was carried out by studying on principles from typical attack representatives that were divided into both ‘offline’ and ‘online’ groups. Research was followed by one case study on an attack which originated internally from an enterprise, gave strong support to the importance of intranet security viewpoint that holding by previous theoretical studies.

One whole process of attacks over LAN was designed and implemented within laboratory environment to verify the study. The series attack contains network join, exploits discovery, and penetration implement phases. The laboratory work was finally achieved by logging target victim’s personal credentials.

Within Network join phase, wireless attack on WPA/WPA2 secured Wi-Fi signal with WPS function on was taken and layer-2 attack turns intruder into man-in-the-middle and got the relatively higher privilege than a regular network user. Genlist, Nmap, and Nessus was used to make full network scan in order to detect the intranet topology. Phishing was the main character in the penetration implement phase, thus milder attack method like web cloning, DNS fraud was utilized rather than offensive ones. In the end, the key logger in the back end captured the credentials from target victim successfully and the possibilities of migrating the attacks to mobile devices was analysed.