Thermal climate in a data center 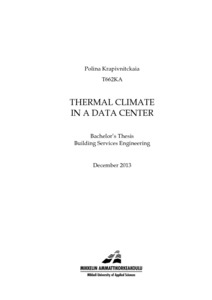 The aims of the thesis were to clarify the importance of thermal climate, to find the range of air properties when the equipment is functioning reliably and the ways to achieve this range. The thesis consists of two parts: theoretical and practical ones. In theoretical part, TIA and ASHRAE standards are studied on the optimal range of air properties, white papers of Schneider Electric are studied on air distribution and air cooling systems. In practical part, a functioning data center is studied. Measurements of dry bulb temperature and relative humidity have been done and an analysis was done based on knowledge from theoretical part.

As a case study a computer room of five years old functioning data center was chosen. The room had about from 50 to 60 server units and was cooled by two air conditioners. The cool air was distributed by means of raised floor. During functioning, the cooling units almost didn’t remove moisture from air. The computer room could be considered as A2 class according to ASHRAE classification because of few locations, where the requirements of A1 class were not followed.