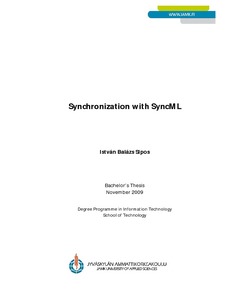 The thesis was assigned by Abakus Ohjelmistot Oy, which is a Jyväskylä based company with the business idea of helping companies with mobile and web solutions. The goal of the thesis was to build a functional demonstration of the synchronization between SyncML compatible mobile client and to provide a common interface for the server-side functionality to connect any data source for the synchronized content. The synchronized content is the Abakus calendar (called aCal).

The Funambol Data Synchronization Server was created to help synchronization based on SyncML standards. The thesis discusses the basics in the design of SyncML and Funambol as well as the development of Funambol Connector.

Important theoretical matters as conflict resolution, synchronization types, id mappings are presented. At the development of Connector can be seen the usage of DAO and Facade design patterns as well as Hibernate, Spring ORM and Maven, which are also described through detailed explanations, figures of the architecture and code.