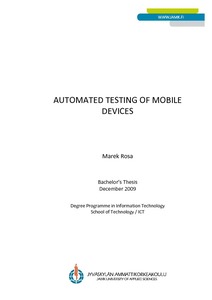 The aim was to study the automated testing of mobile devices to assess the challenges that have to be faced and to find solutions to those problems as well as to perform an automated testing and to evaluate its effectiveness.

The theoretical part discusses testing in general and the testing types. The importance of quality assurance in every engineering process is highlighted. It is presented how the subsequent stages of the testing process had been done. Each chapter describes the tester’s tasks and what needs to be considered when performing them. Typical problems are discussed and some advices on how to avoid those problems are given.

During the study many new automation scripts were created. Those were successfully used to perform an automated reliability testing of many products. Based on the knowledge that was gained, the assigner’s instructions on how to perform automated testing were updated. The testing environment was evaluated and the ideas for improvements proposed. The reporting process was improved by implementing several tools that help to handle the logs produced during the testing round.