The impact of the global financial crisis on entrepreneurship development: A comparative analysis of Europe and Africa between 2004 - 2011 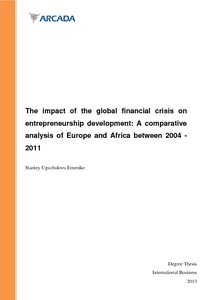 The recent global financial crisis of 2007 that began in the USA was caused by a bubble in mortgage industry and ineffective financial regulations. As a result of financial globalization, it spilled over to other economies and caused a global recession. Europe and African nations were not left out as GDP growth rate declined, unemployment increased, currencies depreciated, and trade surplus decreased etc. The researcher undertook a study to examine the impact of the global financial crisis on entrepreneurship development in Europe and Africa. In order to answer the research questions, data were collected from secondary sources showing the effect on different economy with central focus on Europe and Africa region. The research shows a positive relationship between dependent and in-dependent variables. The study also reveals the degree of effects varied across regions and countries due to difference in economic structure. The financial crisis had a common and more general impact on entrepreneurship development which was a decline in new firm start-ups, increased rate of firm failure, slow growth, reduced investment, unemployment, change in productivity for existing firms, and decline in bank support in regards to credit facilities.