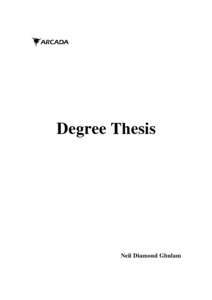 Management consulting has been an interest from early times, since the beginning of the first management consulting firm in 1886 to the present this practice has evolved and progressed to being one of the most sought after industries in the world. After World War Two this practice moved beyond the confines of the United States spreading into Europe. The most important role management consultant’s play are objectively analyzing a situation and accentuating the issues and opportunities they present, then providing solutions to use those issues and opportunities to their client’s best interests. All the information is carefully processed, analyzed and presented, the goal being to provide an optimal solution and strategic plan for the company.

This thesis includes the description of the management consulting process. Using a technique called the “Hypothesis Driven Problem Solving Process”, a hypothesis is used
to generate possible solutions, which are studied and then proved.

Consulting was done for SBX Oy with the objective to expand their business and operations. Using a framework and structure modified to suit the company, the company
was broken down functionally providing a basis for further analysis, then using the hypothesis driven approach, solutions were materialized which were then proved or
disapproved. In addition to management consulting, the importance of effective management is shown. It was found that SBX Oy could be improved in several functional
areas, and that business and operations could be expanded. The findings and proposed solutions from the project were prepared and submitted to SBX Oy in the form of a
consulting report.