Future prospect of Superkid : Proposal for improvement on banking product for children in Techcombank 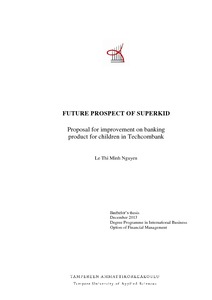 The aim of this thesis was to define and implement the best practices in Superkid, a banking product for children of Vietnam Technological and Commercial Joint-Stock Bank. Superkid was launched in September, 2012 by Personal Financial Services Divi-sion of Vietnam Technological and Commercial Joint-Stock Bank. However, Superkid’s profitability and brand awareness were not outstanding compared to its competitors. The method was used in benchmarking which is a tool to figure the best practices in the same industry and then modify them to suit Superkid’s feature.

In order to propose a practical proposal plan, different analyses were made such as Superkid’s performance analysis, PEST analysis, and competitors’ analysis. Information and data were collected from both primary and secondary sources. According to those analyses, it could be said that Superkid still had the potential to grow its profitability and market share. The product’s performance was influenced by many factors, for in-stance: location, product’s features, promotion campaign, convenient level, and custom-ers’ behaviors. By applying benchmarking method, an improvement plan was made which covered diverse aspects of Superkid that needed to be considered. Although, the proposal plan was made based on Superkid’s competitors strategies, it was modified and implemented to suit Superkid’s features and targets.

Since Superkid was developed by Personal Financial Services Division, an experienced and professional team, the product was thoroughly able to compete with similar prod-ucts in the market. This report reflects author’s main findings and opinions regards to particular aspects needed to be changed, therefore, Vietnam Technological and Com-mercial Joint-Stock Bank can consider it as a reference for its future needs.