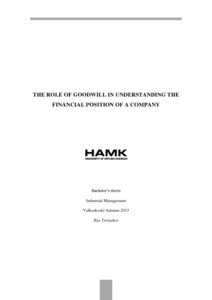 The background of this study is adoption amendments to the standards of accounting and reporting applicable to goodwill by IASB in 2008. The amendments significantly influenced the modern accounting for goodwill in accordance with standards provided by IASB, as well as led to controversy in the financial world regarding the application of the amendments.
The topic for this thesis was provided by audit department of PricewaterhouseCoopers. The problem of this thesis is to define appropriate method for accounting of the goodwill under IASB regulation and what is hidden under this line in some years after the M&A deal.

Qualitative research methods were used in this thesis in the form of text analyses, interpretation and interviews. In order to understand the qualitative component of goodwill, we analyzed the current versions of the applicable standards, as well as previous versions, drafts standards, comment letters to the changes. Also it was decided that it would be useful to know the view of reports users on this line and if possible, its use. We made quantitative analysis in the form of an interviews and survey of people employed in the financial industry and working directly with reports.

Based on the research it can be stated that the current regulation is valid with respect to the accounting of goodwill. Accepted changes satisfy most of the users and perpetrators of the financial reports. We can say that in theory current accounting standards allow user of reports make some conclusions about company financial position, however in practice the value which shown under goodwill line is very subjective and therefore is not very useful. However current regulations may be most appropriate way to subsequent accounting of goodwill.