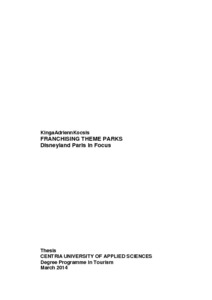 The report consisted of the analysis of theoretical frameworks of franchise and using franchising as a promotional method of theme parks. The definition of franchise and the use, right and regulations of it are essential knowledge to understand the base of franchise based theme parks. Also it was analyzed how franchising affects tourism in specific fields of existing franchises. The role of a franchise in our society and its values was also taken into consideration. The values and the role of the Walt Disney company were under analysis in the thesis. Also the franchising techniques and the success of the Walt Disney company are included.

The goal of the thesis was to show that a franchise can be used as a promo-tional technique for a tourist destination, especially for theme parks. It was also important to show how theming can influence specific products or spaces. Furthermore the history of theme parks and how it formed our society is elaborated in the thesis. The importance of theming in nowadays society is discussed in the focus of the Walt Disney company and how it can create further business possibilities as much as the purchase procedure of a franchise.

The topic consisted of the future aspects and the possible rise of Disneyland Paris, and an overall view of the Disney franchise. It was analyzed through a survey how franchise based theme parks can be more successful. The target group was Disneyland Paris’s cast members. The questions of the survey were to determine that what are the methods to improve the attendance rate and how to improve the theme experience in their view.