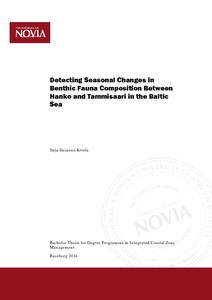 The Baltic Sea has pronounced seasons that bring with them annually occurring phenomena such as algal blooms in the spring and summer and annual hypoxic maximums in early autumn. The purpose of this thesis is to explore seasonal changes in the macrozoobenthos in near shore soft sediment habitats in the Gulf of Finland, between Hanko and Tammisaari. A total of 144 benthic samples were collected from 32 soft-sediment beaches, divided into 4 area types. Samples were collected both in the spring and the summer, and their contents were analyzed to the lowest practical taxon. Shannon-Wiener Biodiversity Indices and species richness were calculated for both seasons within each location group and compared between seasons. The similarities between species assemblages were explored with ANOSIM and SIMPER analyses. Biodiversity was not found to vary significantly between seasons at any location. Species richness was found to increase between spring and summer in Outer Archipelago 1. Slight differences in species assemblages were seen in Outer Archipelago 1 and 2. Changes were found in the abundance of nematodes, which made up the most abundant species group in all location groups in the summer samples, despite making up the most prominent group of fauna only in the Inner archipelago in the spring. Results of this study permit very limited speculation and further study is needed to examine the causes behind changes and the significance of such findings. Selecting more specific taxonomic resolutions and purposeful sampling times are proposed as measures to achieve more specific and relevant results.