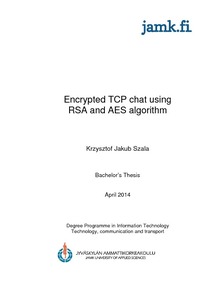 Secure Communication Application is a standalone project which can be used to secure communication between two computers running on Windows. The purpose of the project was to create an application which can be easily divided in-to parts, which allows replacing the user interface by a different one. The project was realized under the supervision of Descom oy.
This thesis demonstrates the process of creating the core of the application responsible for communication over TCP protocol between two computers and the user interface. Secure communication was the most important part of it.
The first part explains the reasons and motivations to create such an application. The goals are also discussed. The following chapter presents the development environment and important theory. Next, the way of designing and developing this application is discussed. Later the way how to replace a user interface with another is demonstrated and finally, the application is tested and the results and conclusion are presented.
The result of the thesis is functional software able to ensure secure communication between two computers. The programs were shown with success to the project’s supervisor. Nevertheless, further development would be required to make the application more secure and smooth