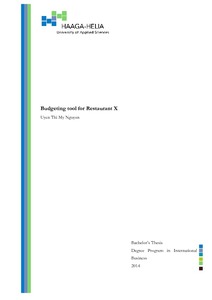 In order to improve profitability and advance a company’s commitment to organ-ize growth, details plans which are called budgets are required. A budgeting tool is a beneficial asset for a company because it helps the budgeting preparation process become easier and faster. Thus, the aim of this thesis is to create a budgeting tool for Restaurant X.
This thesis is product-orientated. There are three tasks conducted in this thesis. First one is to cover all relevant theories about a budget. The second task is to design a complete product-budgeting tool for Restaurant X. The tool is designated on Microsoft Excel and consists not only five budgets: sales budget, direct material budget, labour cost budget, overhead budget and budgeted income statement, but also a performance report. The third task is to conduct a performance report by benchmarking the result generated from the budgeting tool against the actual out-come in First Quarter of 2014 by using the budgeting tool.
The thesis began in December 2013 and completed in March 2014. The budgeting tool was designated from January 2014 to February 2014.
This thesis concluded with the finalised budgeting tool that is able to operate ac-cording to the restaurant manger’s requirements and demands, as well as the per-formance report for Quarter I/2014 that provides informative benchmark be-tween actual outcome and budgets.