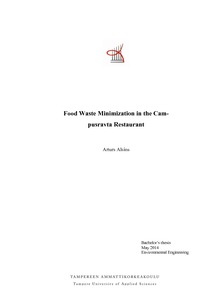 This thesis work was done as part of the European Week for Waste Reduction (EWWR) initiative to reduce the food waste amounts in the Campusravita restaurant. The Campusravita restaurant is the student and staff restaurant in Tampere University of Applied Sciences. The aim of this work was to measure the amounts of biowaste produced by the customers of the restaurant, and then try to decrease this amount. An information campaign throughout the dining hall was launched to raise the awareness of the customers and reduce the amounts of biowaste produced. Finally, the overall amounts of biowaste were compared with the amounts found for a study done in 2009, to see the long-term trend in biowaste quantities.

In the theory part of this thesis, the restaurant itself and EWWR are introduced to the reader. The amounts of food waste worldwide and in Finland are discussed, in order for the reader to appreciate the importance of its reduction. Most of these data were gathered from similar studies done earlier. The environmental effects of food production and wastage are also discussed in brief.

The results of the study show that each customer of the Campusravita restaurant produces about 22-29 grams of biowaste per meal. This amount includes tissue paper napkins, the weight of which is hard to determine exactly. Altogether the measurements were done for 4 weeks, over which period the total amount of biowaste produced varied between 200 and 300 kg per week. This amount largely depended on the number of cus- tomers that ate at the restaurant in the particular week. Furthermore, the results showed a considerable decrease in total biowaste produced in the restaurant compared with the data from 2009. However, this comparison is not exact since the measuring methods varied considerably. Overall, the impacts of EWWR can be considered successful since the amounts decreased over the four-week period of the study. However, here too further study would be necessary to confirm the data. To further reduce the amounts of biowaste produced by the customers, permanent initiatives are suggested in this thesis. These include rearranging the layout of the lines where food is taken, and placing permanent signs to raise customer awareness.