Social Media as a News Platform 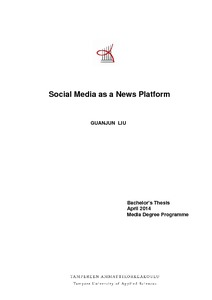 Since the birth of social media, we’ve seen a dramatic transformation of how news is produced and consumed and how we interact with it. The main drivers are the rapid development of technology and a boom in the number of social media users. For example the Pope interacts with his followers on Twitter; the newly elected Iranian president, Hassan Rouhani, opened his Facebook profile to the public, and 2013 Russian meteor explosion went viral on YouTube with millions of hits. Thus it is conceivable that the statement “social media will overtake mainstream media” is not a view held by the minority.

Despite the rapid uptake of social media, my research survey indicates that a large proportion of people still have a high rate of trust in mainstream media and professional journalists, even though overwhelming majority of my respondents are more likely to access news online than using traditional mediums such as print and broadcast media.

Top ranking social media sites such as Facebook, YouTube and Twitter have only been in existence for less than a decade, so it is inevitable that there will be a flurry of issues that will need to be tackled in respect of these sites being used as trusted news platforms. For most users, the challenge of using these sites is how they can filter or select what is of interest or relevance through the ‘din’ of large amounts of bite-sized information delivered by various social media.

Mainstream media and professional journalists will not suddenly lose their existential value, neither will they simply be weeded out by social media; rather the convergence of social media with mainstream mediums will be the norm.