Optimizing Video Games for the Hearing Impaired : The Use of Haptic Feedback and Visual Cues in Games 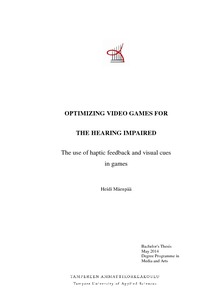 The purpose of this thesis was to see how games can be optimized for the hearing impaired users without adding greatly to the development costs. The objective was to collect data on the target group’s gaming habits and explore ways haptic feedback and visual cues could be used in games. Based on the findings the aim was to create a sound-based puzzle game and optimize that to the hearing impaired gamers.

The initial research data was collected from 28 people in an online survey. The results were analysed using qualitative methods to visualize the findings and quantitative methods to get specific statistics. The data from game testing was collected in the field from 10 people. The theoretical section of the thesis goes through the definitions of the hearing impaired, video games, sensory information, subtitles and the collected research data. The practical part focuses on the optimization of existing games and the creation of a new game.

The majority of participants believed that current video games were lacking in their use of subtitles and the ways they were optimized for hearing impaired users. At the same time most were also willing to pay for better subtitles. The majority also wanted to have haptic feedback in their games. These results suggest that there is a market for more optimized games if the game developers are willing to answer the consumer demands.

The findings indicate that the video game industry is behind in providing accessibility compared to other entertainment industries. As the game industry grows it is imperative to prevent further inequality between players and start taking measures against ability-based discrimination. Further research is necessary to create unified systems all game developers can use to make sure their games meet the requirements of hearing impaired players and those with other disabilities. Furthermore, developing a universal and mandatory accessibility rating system for all video games would promote gamer equality and raise awareness of the accessibility issues in the industry.