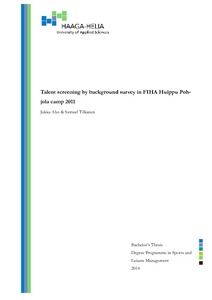 The aim of the thesis was to examine the functionality of the Finnish Ice Hockey Association
scouting system through a survey. The survey examined the backgrounds of
the players picked to the Huippu Pohjola camp, and possible differences between players
picked to the national team and players that were left out at that time. 106 players
responded to the survey, and it contained 68 different questions in five different categories.
The project was started in November 2010 by compiling a background inquiry to the
Huippu Pohjola camp organized by the Finnish Ice Hockey Association. The subjects
of the survey were the players born in 1996 that were picked for the camp. The survey
was carried out during the camp in the spring of 2011. The basis for the survey was to
examine different talent theories, and to apply them to the functionality of the scouting
system.
The survey gave information about the backgrounds of the players, and also gave a lot
of information about their family, training and growth environments. In addition, information
about the responders’ traits, self-recognition and coach player relationship
was received. Basic information like date of birth, height and weight was also gathered.
The results indicate that clear differences could be found between the players that were
picked and the players that were cut. Based on this study it can be said that to develop
the scouting system, surveys like this should be conducted in the long term in connection
with the Huippu Pohjola camp.