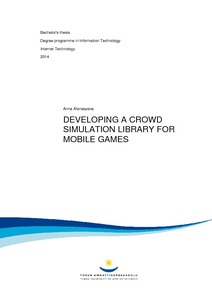 The purpose of thesis project was to develop a library, later referred to as SteerLib, for realistic crowd simulation in mobile games designed for iOS platform. Today, it is common to see high-end PC and console video games incorporating large heterogeneous crowds, typically consisting of hundreds of NPCs. In contrast, mobile games avoid using crowded environments because of their computational and graphical demands. According to the latest research, modern mobile phones and other mobile devices are capable of simulating large crowds without serious performance degradation. Nevertheless, the preliminary studies made by the author have shown that there is a lack of libraries for simulating large crowds on mobile devices powered with iOS. Thus, SteerLib is intended to help game developers to create iOS games which implement scalable crowds of hundreds of NPCs exhibiting natural behaviour. The library is implemented in Objective-C programming language and is designed to be used with the Sprite Kit framework. The thesis itself is structured as follows: first, it explores the three most common crowd simulation models, which are cellular automata, social forces, and rule-based models. Then, it provides arguments in favor of rule-based models as the most suitable on for implementation in the library. Finally, it discusses the library development and provides test cases.