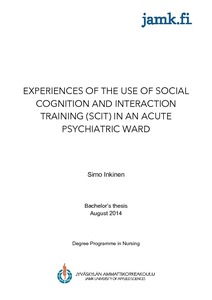 Abstract
The client of the thesis was a psychiatric ward of a university hospital district in Finland. The
aim of the thesis was to collect and analyse experiences of use of the Social Cognition and
Interaction Training (SCIT) in the ward. The study was conducted from the point of view of
the SCIT instructors in the ward.
The study was based on a qualitative research approach. The data was collected by using a
semi-structured group interview in order to enable the raising of new issues as freely as
possible. In addition, the client had positive experiences of the use of semi-structured
interviews in previous research projects. The data was analysed by using an inductive
content analysis, which allowed the modification of the research questions according to the
findings of the analysis.
The research questions were: How do the instructors experience the use of SCIT in the
ward? What factors affect the use of SCIT in the ward and how? What could be done to
enhance the use of SCIT in the ward? The results were highly positive. The instructors felt
that SCIT was an efficient and easy-to-use method and that it had helped the patients in the
ward. SCIT was seen as a promising method with significant potential. Challenges in use of
SCIT in the ward were also discovered as well as ideas for enhancing the way it is used.