An assessment of CSR-awareness amongst emerging business persons 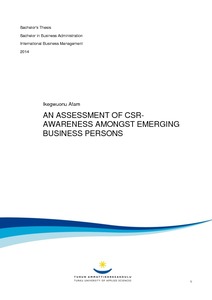 Corporate Social Responsibility (CSR) has evolved over the past few decades, and has gradually been integrated into mainstream business thought and practice as witnessed recently. However, it remains a controversial subject such that wholly capturing its essence remains a difficult proposition, although it has already undergone several adaptations. Several definitions exist but since none is yet to properly define the concept, the search continues for the more fitting one and opinions remain divided over its usefulness or otherwise. Some of the issues have compelled some of the commentators to suggest that the concept be discarded, suggesting alternative replacements. Some other commentators have proposed modifications to the concept as it is. This work traces some of the extant definitions and discusses some of the other contentious points. The disputes as to the satisfactory nature of the subject leaves doubts whether relevant stakeholders are sufficiently aware of the subject. Thus, this seeks to test that awareness amongst emerging business persons, to determine their perceptions and to consider whether they particularly align with any of the extant views or rather possess different perspectives on the subject