Behaviour of Tylosin in Presence of UV Radiation 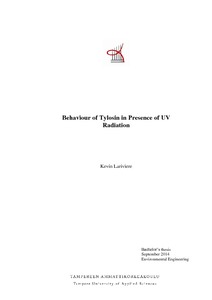 The occurrence of pharmaceuticals in the environment is a popular topic and is currently being heavily researched. Tylosin is a macrolide antibiotic used extensively in livestock farming and also in veterinary practices for other domestic animals. Tylosin is fatal to equestrian animals, however. In wastewater, tylosin has been measured to occur in the micrograms per liter range. In this experiment, the concentration is raised to 0.5mg/l to allow for easier detection. The rate of degradation should remain the same. Algae was to be used to degrade the tylosin, as it has been proven to work very well to remediate heavy metal laden waters. In the experiment, 0.5mg/L of tylosin was spiked into 4 beakers. Two of these beakers contained algae and two contained a phosphate buffer adjusted to a pH according to the algae’s diurnal cycle pH. The beakers were then split into two groups with one algae and the corresponding pH for either the day or the night cycle. For each of the beakers, a replicate beaker was prepared to confirm results. This gave a total of 8 beakers, 4 beakers in each cycle. The beaker in the day cycle were placed under both UV and visible spectrum lights for 48 hours, and the night cycle beakers were placed in a light-tight box for 48 hours. When the samples were taken and processed using methanol extraction to separate the algae from the liquid and solid phase extraction to isolate the tylosin concentration, the algae sample results were not what was expected. The initial concentrations varied wildly and, in many cases, concentrations spiked in the middle of the experiment. The protocols were retested and confirmed to be correct and due to time constraints, a new experiment not containing algae was developed.

In this new experiment, phosphate buffers were used to simulate the pH in the algae diurnal cycle and left for 48 hours in the same configuration as the previous experiment. The same protocols were used to process the samples and analyze them. In this new ex-periment the initial concentrations were in the correct range of 0.5mg/L and the rest of the results were quite interesting. The tylosin degraded well in the experiment, suggesting that raising or lowering the pH levels destabilized the compound enough to degrade. The final concentrations bottomed at roughly 0.08mg/L. In an interesting note, the concentrations at 1 hour seemed to normalize to an average of about 0.24mg/L from initial concentrations ranging from 0.3to 0.9mg/L.

The errors in the results from the algae experiment were not possible to identify in the time allotted for the experiment. The protocols involved in the pre-treatment were checked for errors, but were found to be correct. The same protocols were used to treat the phosphate buffer experiment and the results showed slightly more rapid degradation from the day cycle with pH6 buffer, though degradation halted for most samples at 0.08m/L.