The networking sub-system of the virtual European Mars Analog Station 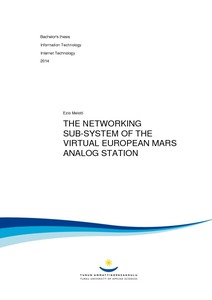 In the latest years, Mars colonization has been a topic of interest and active research for several organizations such as the Mars Society. The Italian branch of the Mars Society started working on a virtual reality simulation of Mars (called V-ERAS) that can be used to experience life on Mars, train astronauts, and for several other purposes.

The goal of this thesis is to design a networking sub-system that can be used to connect different devices and stations used for the simulation. The design needs to consider several different aspects, including the architecture of the system, the software and frameworks used, and how these devices and stations communicate with each other.

In order to determine the best solution, a number of different approaches have been identified, and the most promising ones have been tested with simplified scenarios to verify that they can indeed be implemented within the system.

The tests revealed that the Tango framework was the most effective solution, since it had all the required features and demonstrated to be stable and reliable. The MORSE framework also proved to be a good candidate, but it still had issues that need to be resolved before it can be considered again.

The final design described in the thesis will be adopted by the V-ERAS project and tested with a complete setup. If necessary, the design will be adapted to correct any problems that might arise. If the project proves to be successful, other organizations will also be able to benefit from it.