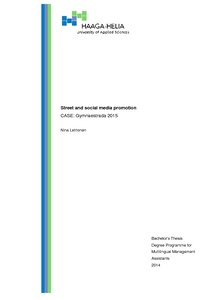 This thesis is a case study research of the case organization Voimisteluliitto (the Finnish Gymnastics Federation). In more detail it analyses the promotion process for Gymnaestrada 2015, a huge gymnastics festival that is held in Helsinki in summer of 2015. The organization and the festival are introduced in the first part of the thesis.

The empirical part was completed during summer 2014 and it consisted of the process or organising a street promotion event as well as producing content to the social media channels of Gymnaestrada 2015.

The research was conducted as a case study research and the goal was to analyse the different promotional tools and their suitability in different situations, as well as to participate in the promotion process. Observation was used as the main research tool in the case study.

The results of the research support the theories about street promotion and social media promotion. The information acquired through observation show the importance of planning and preparing, but also how the organizers must be able to adapt the made plans to the actual situation to reach the maximum potential.