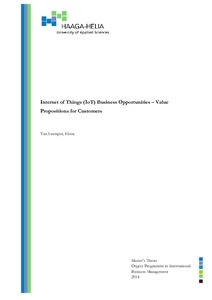 The conceptual framework was based on value propositions, value creation and capture as well as Business Model generation according to Grönroos, Vargo & Lusch, Anderson et al. and Osterwalder, respectively.

The study was carried out using inductive qualitative methods. Data were gathered with qualitative research based on inputs from five IoT case companies as well as field observation data from various workshops and seminars.

The findings suggested that a change of mindset is required; that data management is very important in IoT; that there is a lack of willingness to invest in IoT; and that there may be a lack of knowledge and skills among staff. The findings also indicated that in IoT value can be captured not just during sales but more importantly after sales, and that this can be done with many non-traditional methods. In addition, there is not one dominant business model in IoT. Furthermore, the EU holds an important role in shaping the future of IoT.

In conclusion, this research opens up a better understanding of the IoT business opportunities and landscape through the different ways that value can be created and captured in IoT. Knowing how to create value in IoT and when to capture it gives companies an opportunity to provide better value propositions to their customers.