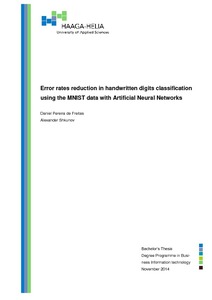 Throughout the research, several ecosystems have been tested and their results catalogued in the Results sections towards the end of the thesis. The main tools used were R, Octave and MATLAB. It has been found that out of the 3 aforementioned tools, R is the one with the worst performance whereas Octave and MATLAB both show a significant performance improvement. Finally, the thesis was finalized with the MATLAB ecosystem due to a mix or performance plus convenience, which allowed for very quick and efficient prototyping.

As for the data predictions, the dataset was divided into a proportion of 60/20/20 for training, validation and test sets respectively. The results were catalogued throughout 5 implementations each building on the top of the previous one until an accuracy plateau was reached. Said plateau was found at the 97.6% mark thus allowing to conclude that error rates can indeed be decreased through Artificial Neural Networks.

Additionally, it has been found that there are several ways one could theoretically use in order to increase the ANN’s performance. For one, the authors were able to systematically decide the ideal amount of hidden units needed as well as the regularization.

The paper also discusses the vital role, data processing plays in the overall outcome, performance and efficiency of the algorithm. As a matter of fact, the algorithm is only one part of a much bigger picture which is Machine Learning.