Profitability Analysis of Ethiopian Airlines from 2009 to 2012 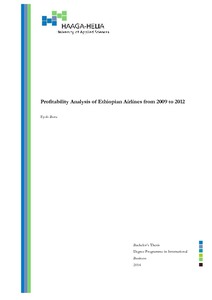 The main objective of this thesis is to study the financial statements of the commissioning company and analyze its financial performance from 2009 to 2012 financial years.

The case company is one of the big players in the African aviation industry with many countries as its destinations all over the world. On many occasions, world Airline Awards have ranked it as one of the best five airlines on the African continent.

Since 2009, the case company’s net profit declined as its income statements show even though the company has managed to generate higher sales revenue year after year.

Theory part of the research discussess about the format of the case company’s Income statement, profitability analysis tools, benchmarking and a general overview of the Airline industry.

This research paper analyzes the income statement items of the commissioning company and,through benchmarking against its direct competitors and using financial statement analysis ratios, creates a summary on its overall profitability performance in the four fiscal years covered.

In this period, the case company expanded its service to many international destinations through latest airplanes purchased, alliance and code share agreements signed with different airlines and airline groups.

The data analysis revealed that an increase of flying cost is the major cause for declining profit of the case company. In addition, slight cuttings of marketing & sales expense and weak results from non-operating activities have contributed to the poor profit reports.

The benchmarking analysis and other ratios indicate that the case company’s profitability during the four fiscal years covered is higher than its direct competitors.