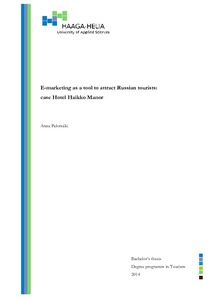 The thesis commissioner is Haikko Manor hotel located in Porvoo, Finland. The hotel provides various spa treatments, as well as different kinds of activities for both leisure and business customers. It has been considered the best conference hotel in Finland. Russian customers form the biggest foreigner group of the hotel’s customers. Thus, the importance of this target group is quite significant. The e-marketing was chosen as a tool in order to attract this type of visitors.

The main objective of the thesis is to find out the most efficient and powerful tools to be applied to the Russian customer segment. In order to reach the goal, an empirical research was conducted. The author has used the mix of quantitative and qualitative research methods. Such methods were chosen because of relevantly large-scale sample.

The research took place during New Year holidays, from 30 December 2013 to 10 January 2014. The total number of respondents amounted to 154, all from Russia. All respondents were given the printed version of the questionnaire on the reception of Haikko Manor hotel. Most of the visitors were reached by the author in person.

The SPSS statistics software was utilised when analysing collected data. Results of the study were presented by use of numerous graphs. In the end of the thesis, several suggestions were proposed to Haikko Manor hotel in order to create/improve the e-marketing plan to be utilized on Russian market.