The design and implementation of multiplayer, web-based, 2D game made in client-server architecture 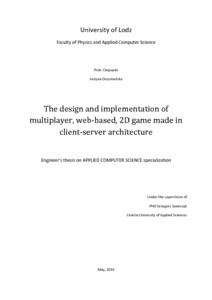 Even though Ludwig Wittgenstein – Austrian-British philosopher – was the first man to address a definition of word “game”1 in his Philosophical Investigations book in 1953, games were known to human since the ancient times2. Because people are social beings and they long to interact with each other, a purpose of majority of games was – and still is – to spend time with others in a friendly atmosphere. It is also in human nature to face challenges and compete with other people and it is reflected in social games as well. Of course the topic is much more complex, but the fact is that games are one of many important experiences in human’s life – they teach us creativity, solving problems, interacting with other people and reducing stress of everyday life 3. One could say that today’s popularity of games is caused by nothing else but marketing. The truth is that marketing only makes people decide to choose one title over another, but the need of playing itself lies in human nature. Psychologists still cannot fully answer the question of why do people like to play games so much, but most of them agree that it is stress in school, in work, but also boredom that motivates people to do it.
Interactive entertainment industry is currently one of the most influential branches of the industry. Its beginnings in the mid-1970s were humble – only small groups of people decided to develop games and they lacked players interested in their products. Most games were created as a hobby projects without purpose of earning money. Soon the amount of players was increasing rapidly along with the games popularity. Tiny market of video games turned into a giant industry after few decades and now its income is estimated to be 24.75 billion US$ in 2011 only in the USA4.
A few of most recognizable video games developers are: Electronics Arts, Inc., Ubisoft Entertainment S.A., Activision Blizzard, Nintendo.
For us, video games were always one of the greatest hobbies. Since we remember, we were interested in playing, but also in thinking about how do those games are developed – how people can create such interactive, virtual – but realistic - worlds.
During studies we already had an opportunity to work on one video game project, which was created by us from scratch without using any external engine. It was a 3D game which allowed the player to walk in three-dimensional abandoned mine in order to find as much gold as possible and leave before the mine collapses. It helped us a lot in understanding problems considering game development and thanks to that we also noticed how working on a complex project like this can boost one’s programming and designing skills. Though we were excited about results we achieved, we saw mistakes we made during development and we were more motivated in creating something even more extended and complicated. This is how the idea for this project was born.