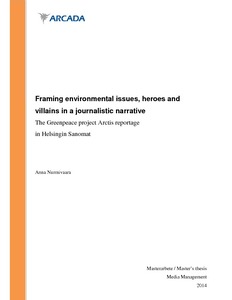 In September 2013 Greenpeace demonstrated against the Russian oil corporation Gazprom and arctic oil drilling, which led to massive media coverage in Finland as one of the arrested activists was Sini Saarela, member of Greenpeace Finland. The aim of the research was to understand how the environmental issues were communicated and framed in the journalistic narrative in the Helsingin Sanomat online news portal. The aim was also to create an understanding of how the parties involved were framed, as heroes or villains.

This research is conducted using a qualitative, data-driven method that is based on the communications theory of narrative framing. Three main frames were found and analyzed. The risk frame covered the environmental issues that were mainly communicated on a risk level. The heroes and the villain frames characterized the parties that created the main conflicts. The parties of conflict were Greenpeace, the Russian authorities and Gazprom.

The Sini Saarela frame analyzed the framing of Saarela, as she became the character for the media to follow. Saarela was framed a character the editorial office obviously symphatized. environmental friend and a sincere friend.