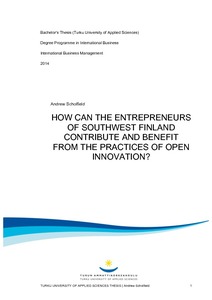 The following thesis investigates the specific theory of Open Innovation (OI), the categorisation and understanding of entrepreneurial activity as well as other relevant aspects of innovation theory more generally. The objective of the research paper is to study how well the entrepreneurial community of Southwest Finland understands the concepts of OI and to what extent they have the motivation and opportunity to participate and contribute to the innovation processes of a second party.
The first section of the literature review, OI theory is explained along with the different ways in which the theory has been applied, examining both the traditional and the non-traditional methods. The second section of the literature review examines the general understanding of entrepreneurs, what defines entrepreneurial activity and then presents a working typology of entrepreneurs constructed in order to identify the categories most at risk of marginalisation. The third section of the literature review presents some other important aspects of general innovation theory which contribute to a richer holistic understanding. The research questionnaire surveys entrepreneurs of Southwest Finland regarding 1) their general entrepreneurial circumstances, 2) their motivations and attitudes regarding contributing towards innovation process, and 3) their awareness of, and level of opportunity to engage with, OI processes.
The findings identified a significant proportion of those surveyed who were operating as an entrepreneur in only their first enterprise, earning an annual turnover of below €50,000 and employing less than 5 people. There was also a significant proportion of respondents who valued innovation and the access to ideas as important and were positive about the ease with which they could innovate. Whilst there was a relatively equal split between those who had been involved in the innovation processes of a second party, there was a significant proportion of respondents who were not familiar with OI and a large number who had not been involved in the specific practice of OI. The findings demonstrate that there is justification for further analysis of entrepreneurial involvement in OI and the development of collaborative projects that seek to more efficiently harness and cultivate the enthusiasm and experience of the entrepreneurial community.