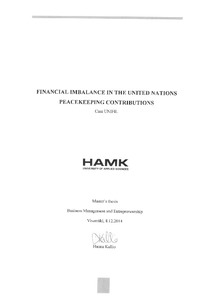 The thesis idea originated from the experiences of serving as a chief of finance in the UNIFIL peacekeeping operation. The research is meant for the Defence Forces of Finland to act as a trigger and a contribution for future decision making regarding the United Nations peacekeeping.

As the main result it was found that due to political factors and the imbalance in the financial and troop contributions to the United Nations peacekeeping, higher income troop contributing countries are shifting towards NATO and EU –led peacekeeping operations, while lower income contributors send more and more troops to UN operations.

The development idea based on the research is to investigate further into the national benefits gained from participation in the United Nations peacekeeping as opposed to the benefits of NATO or EU –led missions. As for peacekeeping as a concept, an impartial study of the necessity of the UNIFIL operation and the continuous presence of international troops in the South Lebanon area should be conducted in order to gain wider perspective in the matter.