Structural analysis and design of a warehouse building 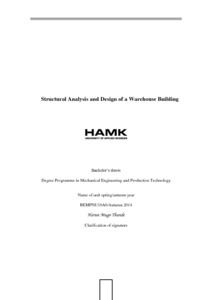 Until recently, analysis of complex structures proved to be difficult and consumed too much time. Credit to the highly powerful computers and research work, efficient methods of structural analysis have been developed.

Finite element method was the analysis method chosen for this thesis. The method investigated the most vulnerable parts due to high stresses. This type of analysis initially simplified the problem in order to see the bigger picture. Details of the structure were then singled out and analysed. For example the truss and column were first analysed then the individual members of the truss were independently investigated.

Parts of the structure that experienced high stresses were redesigned in order to reduce the stress levels. For example for the truss members, cross section properties were changed which increased the second moment of area. The type of material used on the beams was changed to increase the stiffness. In a nut shell the analysis showed the most vulnerable parts due to high stresses. The next step was to isolate the members and manipulate the design so as to cater for the high stresses.

The analysis covers majority of the thesis and is the most important part. There were many dependent steps involved in the analysis. Ninety percent of the structure did not experience high stresses. Redesigning was crucial to support the analysis.