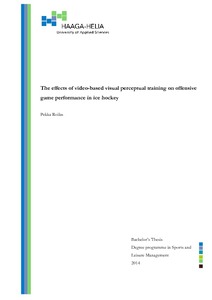 This Bachelor’s thesis discusses the role of game sense and decision making in ice hockey. The aim of this research-based study was to develop a dry land training method to improve ice hockey player’s decision-making skills.
The thesis consists of a theory section, game analysis section and an empirical section. The theory section deals with essential concepts of cognitive behaviour. The game analysis section discusses the characteristics of ice hockey, and the emperical part outlines how the study was planned and implemented.
The research was based on qualitative methods. The study was conducted among eight E1 junior players, of which four served as an experimental group and another four as a control group. The experimental group completed video-based visual perceptual training sessions, whereas the control group did not perform any additional training sessions. The percentage of right decisions increased 2.75 percent for the experimental group, and 0.25 percent for the control group.
Despite the promising results of the study, not enough data was collected to draw any scientific conclusions to confirm if visual perceptual training affected player’s offensive game performance. Nevertheless, the research lays a salient foundation for future research, and provides practical implementations of decision making training.