The Adaptation of the Finnish model for recycling of aluminum cans in Saint-Petersburg, Russia 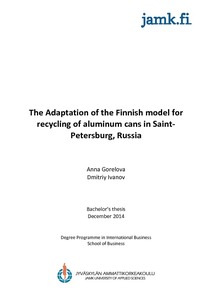 The aim of the thesis was to create a business model for an aluminum can recycling system in St. Petersburg, Russia. The objectives were to study the possible business models that could be applied in St. Petersburg and to determine the roles and responsibilities of the parties in the process of collecting, transporting and recycling aluminum beverage cans.
The authors used a qualitative approach and a survey as the data collection method. The primary data was collected by using semi-structured interviews in order to form a better understanding of the phenomenon. There were three respondents from the Coca-Cola, REXAM and PALPA companies. The primary data helped to analyze the aluminum supply chain in Russia and in Finland, as well as to create a suitable business model for the proposed company. Moreover, the theoretical framework contained Osterwalder’s Canvas model, the MNE/NGO collaboration model and the “social business model” concept that were used in the creation of the suggested model.
The results of the study helped to design a model that can be applied in St. Petersburg. Possible limitations as well as contingencies were taken into consideration from the beginning of the research process. The authors believe that the thesis can be used as a model framework for future research in the field.