Comparison of some FEM codes in static analysis 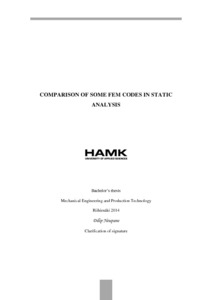 The aim of this thesis work was to compare some finite element method codes and their theories in a static analysis with few different examples. The comparison was made between open source and commercial FEM codes. This thesis was commissioned by HAMK University of Applied Sciences. This work was mainly based on the use of the finite element methods in a static analysis.

The primary goal of this thesis was to conduct a research project on open source FEM codes; among them to select a few codes and to compare them with commercial FEM codes to their features and result from differ-ent examples with the same boundary conditions, material properties and geometry. The examples were linear and nonlinear static problems.

The overall conclusion from this thesis project was that, open source finite element method codes can also give similar results compared to commer-cial FEM codes if used with a similar amount of care and knowledge. It was observed that most of the free or open source FEM codes could per-form only a linear static analysis whereas some of them were capable of nonlinear analysis. It was also found that open source FEM code were dif-ficult to learn compared to commercial FEM codes. Although it is difficult to learn these, the main advantage with them is that they are free and offer an alternative choice for those who cannot purchase a commercial FEM code license.