A LITERATURE REVIEW: MENTAL HEALTH EFFECTS AND ASSESSMENT TOOLS OF ALCOHOLISM AMONG THE ELDERLY 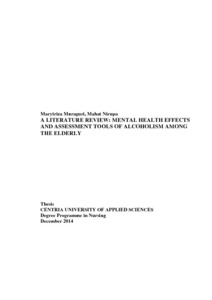 The research methodology established was based on literature review with content analysis. Data was acquired from different databases such as Cumulative Index to Nursing and Allied Health Literature, Science Direct, SAGE publications, E-Library and web- based publications.

Depression, dementia, Marchiafava-Bignami Disease, Wernicke- Korsakoff’s Syndrome, Parkinson’s disease and various cognitive impairments were associated with alcoholism among the elderly. The common assessment tools used in assessing alcoholism include the Alcohol Use Disorder Identification Test, the Cut down Annoyance Guilt and Eye-opener test and the Michigan Alcohol Screening Test- Geriatric version. The results will assist nurses to improve their knowledge on mental effects of alcoholism and the appropriate assessment tools to detect alcoholism among the elderly.