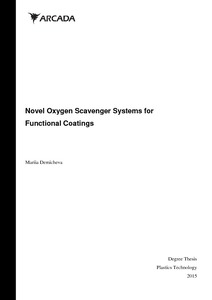 This thesis work was aimed at developing a novel oxygen scavenging material suitable for being used in functional coatings. It provided an overview of existing oxygen scavenging systems and technologies, and defined the restriction in using them for food applications. The major objective of this study was creating, optimizing and testing oxygen scavenging substances based on polybutadiene. The study was conducted in October 2014 – January 2015 at Evonik Industries AG situated in Hanau, Germany.
The empirical part of this study was conducted at the laboratories of Evonik Industries AG. The recipe for suggested oxygen scavenging material was tested with two polybuta-diene types of different isomeric structures and various amounts of additives. The results of the experiments were compared in order to reveal samples with highest oxygen absorp-tion capacity.
The experiments resulted in obtaining the material possessing high oxygen scavenging ca-pacity of approximately 26% (mass of oxygen by mass of polybutadiene used), which is relatively close to theoretically suggested maximum. The data obtained during the exper-iments were not enough to clearly determine the most effective polybutadiene type for oxygen absorption.
This thesis suggested the potential oxygen scavenging system based on the obtained ma-terial, including possible application methods of the material in functional coatings.