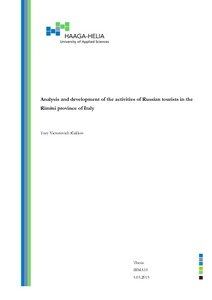 s_Analysis and development of the activities of Russian tourists in the Rimini province of Italy.pdf (515.8Kt)
Lataukset:

The study investigated the phenomena of mass Russian tourism in the Rimini province of Italy in the aspects of its history, specificity, current state, and prospectives for future. As the modern tourism is highly integrated with Internet and High-Tech those convert it into e-tourism then the study also has verified the role of information technologies in the phenomena.

The meaning of the Russian tourism for the economics of the province is described by the fact that among 30 percents of not Italian holidaymakers in Rimini Russians represent the biggest group - 20 percents from all the foreigners for 2013. Another important factors are the significant expenses of Russians for shopping and entertainment; their preferences for long vacations, and visiting Rimini all the year around.

The study used as sources the official statistics, literature, Internet tourism resources, netnograpy, business reports and discussions with the local tourism professionals. The empirical part has been done as a survey conducted in the Russian language among more than 200 Russian tourists in Rimini.

The study showed that in spite of the importance of the Russian tourism for the local economics its recent fast growth was rather extensive than intensive. High interest of Russians to Italy along with their growing financial opportunities for traveling abroad allowed the local tourism business and authorities do not apply strong efforts for the development in favour of offering the standard activities (beach vacations and excursions in Italian famous cities) that are interested rater for new comers than for repetitive and/or advanced visitors. This was especially visible in the low diffusion of local e-services intended for Russians and weak advertising for them the area’s opportunities in art, culture, special tours, events, and so on. Such strategy worked in the previous years but now in the situation of economical and political difficulties in Russia brings clear threats.

Basing on the ascertained preferences and trends among the Russian tourists the study has suggested measures for resolving those threats. Among them are: offering the popular but out-of-basic Italian tourism products like gastronomic tours or thermal treatment; organizing special activities (natural parks, events); highlighting the Rimini’s area own rich historical and cultural heritage; improving information support especially online with extending e-services dedicated to Russians; paying special attention to those Russians, which would like to travel on their own.

The study’s results are suggested for the tourism organizations and enterprises that already have established activities in Rimini and/or have intentions for developing new ones.