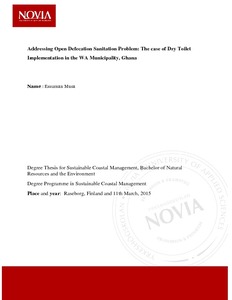 Although Ghana ranks 152 out of 182 on the Human Development Index, it has the 4th lowest rate of sanitation coverage worldwide (UNICEF/WHO 2010). The Wa municipality is no exception. Lack of toilet facilities in many homes in the municipality is something that cannot be ignored, and as a result, people form long queues early in the morning to have access to the few existing public toilets, whereby putting extreme pressure on these facilities. The worst part of the sanitation problem is that some people also prefer the water bodies, bushes, and uncompleted buildings as places of convenience.

Specifically, investigations on whether there are existing dry toilet facilities within the municipality, how beneficiaries are going to cope with and adapt to a new dry toilet facility, and the socio-cultural issues that can affect the sustainability of dry toilet facility were examined. Non Probability-accidental sampling technique was used to select respondents for the study. Simple descriptive statistics such as frequencies and percentages were employed in the data analysis. The study revealed that the main cause of sanitation problem is the open defecation practices. Poverty, illiteracy and lack of public education are all factors leading to poor sanitation. It was recommended that Government through the municipal authority should construct more decent public toilet facilities in the municipality. The facility cost of usage should be subsidized and be made free for children and the aged.