Ethics and code of conduct in zoo management 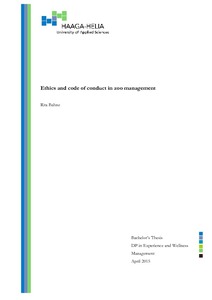 There are around 1 million wild animals living in the 10,000-12,000 zoos worldwide. They include zoological parks, biological parks, safari parks, public aquariums, bird parks, reptile parks and insectariums. Zoo tourism is both domestic and international.

Zoo management involves many aspects from capturing animals from the wild and exchanging them with other zoos. Zoos have roles in entertainment, education and conservation. Zoos often work for profit, which means that the commercial and scien-tific roles of zoos may be controversial. This may cause lack of welfare for the animal at display for the sake of human entertainment. In terms of in-house breeding and conservation, zoos have not done well: breeding healthy animals in a close-knit genepool has proved to be difficult.

Research shows that zoos have faced criticism throughout their history. Public pressure has caused them to develop towards more naturalistic enclosures. Wild animals in captivity show physiological and psychological stress and the standards of animal welfare ranges from zoo to zoo. Many zoos lack legislation that protects animal welfare: the codes of conduct provided by NGOs lack support from a governmental level.

Results indicate that zoos need to develop for them to be accepted in modern society. The discussion suggests that zoos should concentrate primarily on conservation by rehabilitating captive animals back into the wild. The discussion also presents that the conflicting role of commercial and scientific roles should be resolved by governmental involvement. Creating a strict legislation is necessary to improve the welfare of zoo animals, staff and visitors alike. The discussion of this thesis presents socio-cultural indications of current zoo management as well as suggestions for future research.