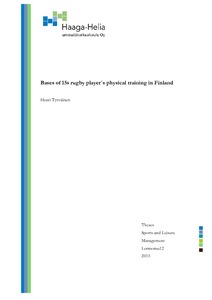 This portfolio work is systematic literature review about physical demands 15 aside rugby and conditioning methods for it. These papers are included in appendices with simplified guide to laws and terminology of rugby union game. Papers are aimed to give aid for the advanced men´s 15 aside union rugby players and their coaches in Finland.

Work starts with the introduction of the work with targets and how the work is executed. Second chapter includes a short history of rugby union game, rugby in Finland, and about scientific approach used in rugby. There are short abstracts of two different papers about the physical demands in men´s 15 aside rugby game and methods for conditioning in men´s 15 aside rugby.

Rugby is a physically demanding ball game which lasts 40min each way. Athletes need to have great fitness, when they continue the battle until the end. The game is full of contact while defending team tries to avoid losing the ground and attacking team is invading to the opponents half. The physical demands of rugby goes higher with the level of the game. Physical conditioning for players need to be well coached to avoid injuries and to be successful in the long term.

This work is created with approval of Suomen Rugbyliitto (SRL) and intended for their use. It can lead to the other works and projects for the further rugby player and coach development in Finland. The knowledge of training rugby in Finland relies on IRB courses, individuals who have experienced rugby abroad, and to those who have been born in the country with strong rugby culture. Still, approach can be quite from amateur bases. On the another hand, Finnish sports and sports science is well known in the world, but on the another hand it don´t involve rugby. Respectively, I wanted to combine the science of rugby from the world and my personal understanding of sports from Finland, and deliver it into the form that is understandable for people involved in elite rugby in Finland.

As the results of this work are the list of different conditioning methods for rugby players, the update of the physical conditioning, and yearly training plan for the Finnish seasonal structure. Comparing the physical test results between Finnish top rugby players and the top of the world it is possible to recognize. Finnish rugby should target the improvement to power, endurance and positional physical training to lead short and long term results