Analysis of the implementation of the Supplier Code of Conduct. Case: Company X, Russia 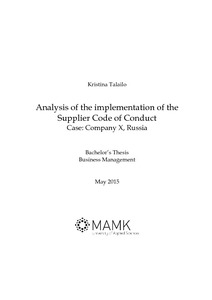 The practice of the corporate social responsibility is evolving, and its expansion has reached the supply chain partners including suppliers. The trend of outsourcing business activities and the globalization of the economy along with NGOs’ initiatives and the demand for transparency led to corporations’ supply chains being under scrutiny. Companies’ reputation is suffering due to relations with suppliers acting against the laws and regulations. With the help of different strategies like devising the written documents with requirements like a supplier code of conduct, training and monitoring, a company is able to exert the influence on suppliers.
The objective of this thesis was to analyze the implementation of the supplier code of conduct across the supply chain of the commissioning company. The research was aimed at investigating the process of the practical implementation of the document, analyzing the strategies for integrating the document into the business practice of the suppliers. The research is based on the company operating in forest industry, which has introduced the supplier code of conduct in Russia.
The theoretical framework consists of the theories about the corporate social responsibility and the tools for managing the corporate social responsibility in a supply chain. The empirical part rests on primary data, which was collected by conducting semi-structured interviews. For this study the whole number of interviews being conducted was 28, comprising suppliers, managers and the members of the work team who have planned the training sessions and the implementation in the company’s department in Russia.
The commissioning company has started to implement the supplier code of conduct, and has devised the written document that is attached to the contracts with the suppliers, as well as, has conducted training sessions. The research has revealed the managers and the suppliers relied mostly on forthcoming audits and monitoring as an effective tool of the implementation of the SCoC. The training was not sufficient for the suppliers. It was identified the suppliers lacked deep knowledge of the requirements stated in the supplier code of conduct. The opinions of the managers and the suppliers were collected and analysed, which served as explanatory factors of such results. In the conclusion, the recommendations based on the results and theories are provided.