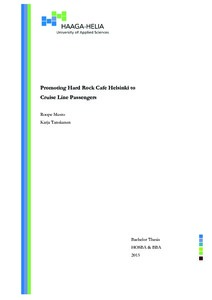 International cruise business has increased in the last decade in the Baltic Sea. Helsinki is one of the harbour cities that a majority of the cruise ships visit. For companies in the business segment of hospitality and retail, international cruise passengers has a great potential in bringing substantial revenue. For 2014, an estimated 390,000 cruise passengers visited Helsinki on around 260 ships.

For this thesis, our objectives are to plan promotional tools for Hard Rock Cafe Helsinki directed at Cruise Passengers using theory and relevant studies. In turn, we try and increase retail revenue in the Hard Rock Cafe Rock Shop during the summer season of 2014. As part of the thesis we also showcase the current cruise market of Helsinki and we introduce the operators in the destination management of Helsinki.

Key revenue figures are shown to illustrate the increase of €31.7K in retail sales at the Hard Rock Cafe Helsinki between 2013 and 2014. It can be argued that is part down to the implementation of the three new marketing initiatives developed as part of this thesis.

We use our findings to compare our theory to our practical implementation and recommend future promotions for Hard Rock Cafe. In turn we pose future research to be conducted to benefit Hard Rock Cafe Helsinki and the cruise market of Helsinki.