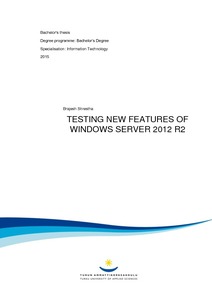 The aim of this thesis is to test new features of Windows Server 2012 R2 in a Microsoft-recommended environment. Of these, it mainly focused on three features, namely, Work Folders, Hyper-V and Generation 2 Virtual Machines.

The installation and configuration of the software in both servers and client devices were carried out with Graphical User Interface (GUI) mainly and the features were tested through different software tests such as functional, performance and usability tests. The tests showed that there were consistency between the Microsoft claims and the test results.