The impact of financial behaviour of the household sec-tor on GDP: A comparative analysis between Nordic countries from 2004 to 2012 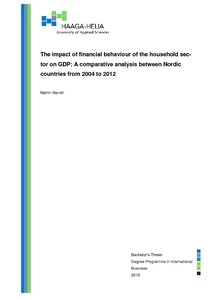 This Bachelor’s thesis examines the relationship between changes in household financial behaviour and GDP in the Nordic countries from 2004 to 2012. Households’ financial posi-tion is one of the key determinants in household consumption and final consumption ex-penditure is said to represent around 70% of GDP in most countries.

The thesis objective is to determine the main similarities and differences between Nordic countries. Additionally, the research indicates the applicability of the results in macroeco-nomic policymaking. The thesis consists of three main components: a theoretical frame-work, a quantitative empirical research and a discussion part.

The theory part examines previous studies, models and theories about the relation between aggregate demand, national accounts and GDP. Most of the theoretical framework leads back to John Maynard Keynes. The life work of some of the key economists, including Nobel prize winners Milton Friedman and Franco Modigliani, is weighed in the context of the thesis topic.

The empirical part deals with applying linear and multiple regression analysis to statistical data about Nordic countries’ GDP, consumption expenditure and the factors determining household financial position and disposable income. The data is gathered from Eurostat – Directorate-General of the European Commission.

The research shows that there is a clear correlation between GDP, consumption and the financial behaviour of households. However, the results are not consistent in all of the Nor-dic countries. None of the regression analyses with high correlation coefficients produced statistically significant results for Denmark whilst 6 out of 30 analyses rejected the null hy-pothesis and can be considered statistically significant for Finland. Further and more com-prehensive investigation of the topic is in order. However, based on the key findings, the implications and applicability of the results are analysed in a detailed matter. The reliability and validity of the analyses are evaluated by an expert on the household sector from Statis-tics Finland.