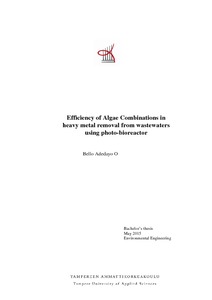 The aim of this thesis was to compare the efficiency of different algal combinations in heavy metals removal from wastewater using algae-based photo-bioreactors. Twelve different strains of algae were divided into four groups and were introduced into twenty-four photo-bioreactor bottles: twelve contained wastewaters only while the other twelve contained wastewaters con-taminated with 90 mg of heavy metal. Parameters such as temperature, pH, light and conductivi-ty, which are believed to affect the rate of metal uptake by algae were monitored.

At the end of the experiment, it was discovered that an average of 88 percent of the metal con-tent in the wastewater had been removed. For nickel removal, the best results were obtained with an algae combination of Anabaena cylindrical and planktothrix rubescene with an average re-moval rate of 100%. The algae group containing Anabaena cylindrical and Scenedesmus Specie, on the other hand was more efficient in removing with an average removal rate of 93.3%. The algae biomass was harvested and analyzed, which revealed that more than 50% of the metal re-moved from wastewater was retained in the algae biomass.